A Q&A With “The Passions Project” Photographer Heidi Wagner 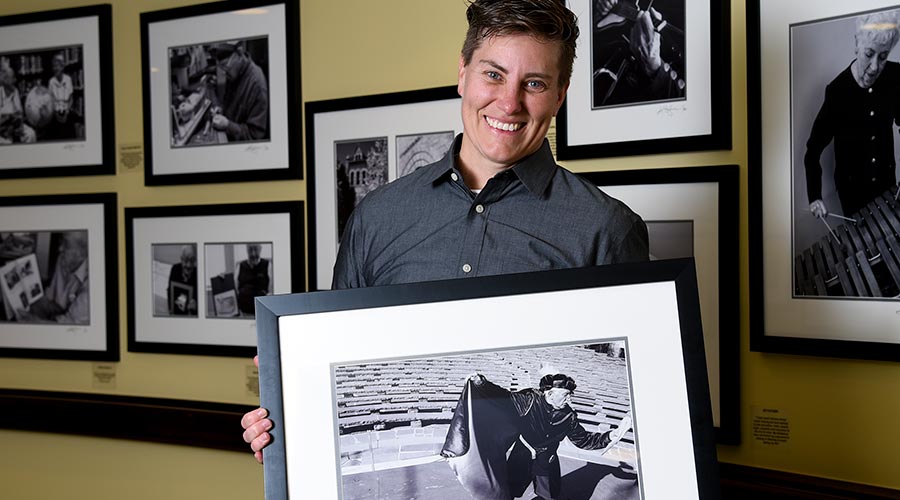 All photos courtesy of Heidi Wagner Photography, The Passions Project

Heidi Wagner is the creator of “The Passions Project,” a uniquely poignant black and white portrait photography series that depicts older adults engaging in their passion.

While working as an exercise therapist at the Frasier Retirement Community in Boulder, Colorado, Wagner began shooting the active, full lives of the residents there. Ten years later, she continues to bring The Passions Project to senior living communities and other organizations across the country, traveling state to state for photo shoots at different communities, where the photos are exhibited.

Wagner recently took time out of her busy schedule to visit our offices in Boulder and discuss the project, including how training a more inclusive lens on our growing senior population can help combat negative preconceptions about aging.

Pivot Communication: What inspired you to begin this project?

Heidi Wagner: I started The Passions Project in 2011, and the inspiration really came when I was working at a retirement community here in Boulder, Frasier. I was working in the wellness center, and the best part of my day was always talking to the residents and hearing about all the cool stuff they were doing. And when I would tell people I was working there, I’d hear a lot of negative stereotypes about what that experience must be like, and that’s just not what I was experiencing. I’d go into work every day feeling incredibly inspired by the residents and not thinking at all about their age, but about what they were doing and what their passions were.

So, I wanted to create a storytelling opportunity for myself, to get behind my camera and tell the story of all these amazing, cool things people were doing. That was when the opportunity to talk about redefining aging really came about, which was so exciting. I started looking at the photos and thinking, “Holy cow, there’s just amazing people and stories out there I can’t wait for everybody to see.”

Pivot: Have you shot this series mainly at senior living communities?

Wagner: Initially, I did. A lot of the work has been at retirement communities around the country, but more recently, I’ve gotten to work with other organizations that are in that creative aging space. Next Avenue commissioned me to go to Louisville, Kentucky, to shoot a whole photo series of older adults. And two weeks after the first exhibit went up at Frasier, LeadingAge asked if they could exhibit the project at their national headquarters in Washington, D.C., and at their annual meeting. So, it’s been exciting to see that other organizations are interested in talking about ageism as well.

Pivot: So, why do you call it “The Passions Project”?

Wagner: I didn’t really have a name for it at first. I just was taking pictures of the residents at Frasier and the cool stuff they were doing, their passions. Residents would ask, well, what we doing today? And I would say, I’m just taking pictures of what it is that gets you excited every day, that thing that makes you want to get out of bed and get to it, and it just evolved. The word “passion” does kind of evoke different feelings for different people, so it was a little awkward at first calling it that. I was sitting in a meeting with Frasier’s director, Tim Johnson, and he said, “So tell us about this Passions Project,” and I thought that sounded like a great name. So, Tim can take a little credit for that.

Pivot: Who are some of your favorite seniors and their passions that you have photographed?

Wagner: One of my favorite moments was in Texas, with John Harris, who was a singer in The Rivingtons, a doo-wop group that’s been well-known since the 50s. We took him to a theater in Fort Worth, and he wore one of the outfits he used to perform in. It was this red tuxedo with this red top hat, and miraculously, it still fit! We had him onstage and we put his music on, and he just started singing all the words to the songs and doing all the movements. People were in tears. It was so beautiful to see him come alive and be transported to this amazing time in his life, to reconnect with something that is so important to him. It just shows you the power of people’s passions, that when it’s really in you, it just comes through.

This project really shows the importance of, throughout your life, continuing to be connected to something that feels bigger than yourself. I see it all the time — when people are connected to their passion, no matter what age they are, it makes their life more full, and it becomes something that pushes them to continue to be great and to see the greatness in others as well.

Pivot: What are some of your other favorites?

Wagner: There are so many. Roxy and her motorcycle. That was a really big one for me. I visited a retirement community in San Francisco called Bethany Center and there was one woman, Alice, whose passion was cooking. I remember walking into her apartment and just smelling this amazing food, and even though we didn’t speak the same language and couldn’t directly communicate, we were able to connect with each other over the food. Then there’s one shot I did of a local musician playing the cornet. I also love the ones of Jim paying the harmonica and Dean playing the piano and Ellen playing the cello. I love working with artists and musicians and seeing them connect with the music and with their instruments.

I photographed this couple dancing, Jack and Billie from Texas, and these people became my family, too. I still keep in touch with a lot of people I photograph. Every time I go to Texas, I have to go have lunch with Jack and Billie. Then, for the project with Next Avenue, I photographed a woman who is on a dragon boat racing team made up of breast cancer survivors. I get to meet these amazing people all the time, and what better way to meet and connect with them than through their passion?

Pivot: What would you like to see change about the public perception of aging?

Wagner: I think there is a sense of unconscious or thoughtless ageism within our culture that we’ve all adopted. Like saying, “Oh, she looks good for her age.” What does that mean? When is knowing someone’s age important to photographing them, meeting them, talking to them, being compassionate toward them? There are very few times we truly need to know someone’s age in order to navigate a conversation or a situation. Ageism is within every system of our culture, and I would love people see these photos and start connecting with others on the level of their passion. To get away from the idea of, you’re too young or you’re too old to do that, and to instead say, do you have the skills to do this, yes or no?

Pivot: Technically, what do you do to capture each subject at the perfect moment?

Wagner: I try to keep it as simple as possible, and I always start off with a sit-down interview. I think having that moment before I pull out the camera creates a comfort level and a connection through listening, so they know that I care about their story and not just their image. At the same time, talking about their passion helps them connect to it as well. Then with the photo, it’s a natural progression to go into doing it after they’ve just talked about it.

I think another part is not overthinking it, not making it too technical, using a lot of natural light, photographing people in their natural environment. One of my main questions is always, where do you do your passion? On your couch? Outside? Where? So, the surroundings are familiar to them, and it’s not about me getting a shot, it’s about me capturing what makes this moment and this passion so special for them.

Pivot: How do seniors tend to react to their photos? What are the reactions from visitors to the community?

Wagner: I think initially there’s always a little hesitation when you’re getting your picture taken. People have different reactions. Sometimes they’ll say, “Can you get rid of some of my wrinkles?” and I’m like, “No! That’s who you are. I’m not changing who you are, and neither should you.” But people love it. I think there’s a real sense of pride when people see their picture, especially within a collective photography exhibit at their community. It becomes less about themselves and more about sharing their passion with other people.

Visitors who see them are often inspired to reconnect with themselves and their own passion. They see the pictures and go, perhaps I’m not as connected to the things that are meaningful in my life, so I want to volunteer or knit or whatever it is. They are reminded of their own passion, and that’s where that connection piece really comes through.

Pivot: Have you always wanted to be a photographer? How did you find your way into that field?

Wagner: Photography has always been in my life. When I was in sixth or seventh grade, I asked my mom to take me to Sears to buy a camera. She was a little confused because my identity within my family and my school was as an athlete. But I just always saw the world that way; I just wanted to see what I could create within that viewfinder of a camera. But I’d never thought of photography as something I could do as a career, so I actually have a degree in kinesiology and applied physiology from the University of Colorado. That path is what brought me to Frasier, and while I was working there, I reconnected with photography on a level that I hadn’t before.

Pivot: What’s next for The Passions Project?

Wagner: I have a couple of really big goals I would love to accomplish. One, I would love to be on Ellen; I would love for as many people as possible to find out about the project. I would love to do a national “What’s your passion?” campaign as a way of eradicating ageism. And I would love to take The Passions Project international and to start doing work with other countries on ageism issues in their culture. We certainly have enough to deal with here, but I think it’s a worldwide issue that needs addressing.

Patrick is a partner at Pivot. He writes, reads, plans, and rides.