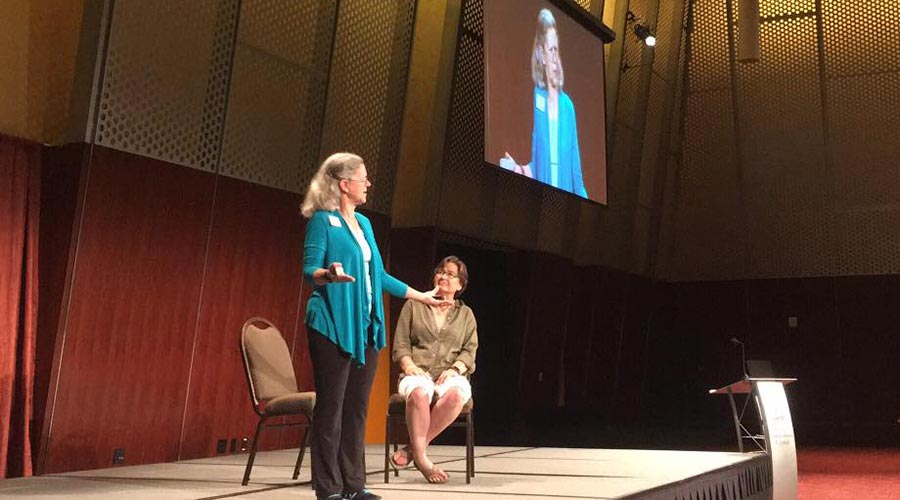 Dementia care specialist and advocate Teepa Snow is the creator of “Positive Approach to Care,” a person-centered approach to treatment that works with caregivers and families to meet the unique needs of individuals living with dementia.

As an advocate for these individuals, Snow helps families and professionals better understand how it feels to be living with the challenges and changes that accompany various forms of dementia. Founded in 2005, Snow’s company, Positive Approach to Care, offers education to families and professional care providers worldwide through speaking engagements, video lessons, online education, in-person trainings and consulting.

Snow recently took the time to speak with Pivot Communication and discuss her philosophy of care.

As an advocate for these individuals, Snow helps families and professionals better understand how it feels to be living with the challenges and changes that accompany various forms of dementia. Founded in 2005, Snow’s company, Positive Approach to Care, offers education to families and professional care providers worldwide through speaking engagements, video lessons, online education, in-person trainings and consulting.

Snow recently took the time to speak with Pivot Communication and discuss her philosophy of care.

Pivot Communication: How did you get started working with people living with dementia?

Teepa Snow: The simple answer is, when haven’t I worked with people living with dementia? It’s basically been pretty much since I was a kid. But when I went into occupational therapy and got my master’s in that, I had the opportunity to serve on an interdisciplinary team at the University of North Carolina’s medical program, where I was part of a nurse/social work/OT/internal medicine family practice team that did teaching programs at nursing homes. One thing happening in nursing homes in the early 80s was the recognition of the presence of dementia, specifically what we thought was mostly Alzheimer’s at the time. People were just starting to think about its impact on health and well-being, but also about restraint use, medication use, social issues, whether it was possible for those patients to rehab at home. So that is how my interest got started and from there I’ve gone many routes.

Pivot: How did you develop your person-centered philosophy of dementia treatment, Positive Approach to Care, and how does it differ from the traditional approach?

TS: Early on, what I discovered when I came to work with people living with dementia, is that where I positioned myself with them seemed to make a big difference in how they reacted to me. Over time, I did research in a variety of settings; I worked with head injuries as part of the behavior team, and we used to have to quote unquote “deal” with problem or aggressive behaviors. What I discovered during that time was sometimes we’re surprising people and getting in their faces in ways they find incredibly frightening and uncomfortable. In some cases, their distress could actually be due to previous life trauma, or it may be that what we’re doing is causing them pain and discomfort, even though we don’t intend to.

So, it was a matter of realizing that what we do can either make the situation better or worse, so I wanted to be alert and aware, to change what I do and how and where I do it. This means that when I’m showing somebody where I’m trying to move them, I engage with them and let them know, so that you get this partnered phenomenon, rather than, “I’m going to do something for you or to you.” As soon as I started taking that approach, there was a big difference in my success rate, whether I was working with people who were coming out of a coma, people living with strokes or people who had dementia, and with their family members as well.

Pivot: And is this when the idea for PAC first came about?

TS: Well, once that positive change started happening, I got more and more curious. Positive Physical Approach was one of the very first approaches I developed, then it became Positive Personal Connection and then Positive Action Starters. These systems were all a way of looking at what can people still do rather than what are they not able to do, and how do I support them? So, that really became my focus: whether it’s dementia, a head injury or something else, how do we help people feel like they have value when objectively, from the outside, they would be rated as less able? But if you still have some ability, it’s like, whoa, where do we get off on making that judgment call? So, it’s this whole idea of a relationship versus this arbitrary value we place on human beings.

Pivot: Speaking of the value we arbitrarily assign others, what are some of the misconceptions the public has about individuals living with dementia?

TS: I think when people live close to it, sometimes they have extreme views of it, and a lot of that has to do with how hopeless or overwhelmed they feel as a family member or a care provider. If I walk into the situation without the awareness, knowledge or skills that would make a difference, then this disease very rapidly makes me feel incompetent and inadequate. So I either have to turn that around and say, well, the problem is her, if she would quit asking me the same question, or trying to go out the door, or asking to go home, then I wouldn’t be having this problem. And my response is, it would be different if you knew what to say when she asked. If you realized that why she’s trying to get home is that she feels like she doesn’t have value here, or she’s not feeling comfortable, or she’s fearful of what you’re doing here, and how can we change that? So to me, one of the big problems still in the world of dementia is that people fear this condition because they see it as nothing but loss, rather than just being different.

Pivot: Do you still work directly with people living with dementia or is your work now mostly educating the senior care industry?

TS: Over the years, I’ve worked in intensive care in hospitals, the VA medical system, home health care, long-term care, assisted living, memory care, continuing care retirement communities, public health and hospice. These days, I do a lot of speaking events; I work with organizations or agencies that are trying to figure out what to do in difficult situations or just build their program up. As a company, we train coaches and consultants and engagement leaders because what we’re realizing is that this type of care takes a whole team of people to support families. We also do online and in-person caregiving classes. I’m also been very involved in advocacy on an international level, so I work with the Dementia Alliance International in Australia and with DAA, the Dementia Action Alliance in the U.S. So, we’re really a combination of advocacy, consulting, training and speaking.

Pivot: Sometimes, although families, caregivers and senior living communities all have the best intentions, poor communication can lead to unsatisfactory care for the individual with dementia. How should communities work with families to create the best treatment plan?

TS: Promising more than you can deliver is a bad idea. Doing the blame game with each other is a really bad pattern because we need to be partners. Another pitfall is leaving the person living with dementia out of the equation — they need to have a voice. Sometimes I still hear people saying, “I’ll just drop her off here and tell her we’re going for lunch,” because they can’t deal with it; they don’t know how to tell her they can’t go back home. What’s also important is this whole idea of, let’s get inclusive and not build these walls and barriers. Because I think sometimes senior living communities can become these isolated enclaves, but people with dementia still want to go out and see other people. Things can also go wrong when a concerned family member gets invested in one perspective or point of view. We need to figure out how to work together because it just wears everyone out if we don’t.

Pivot: What are some other tips for senior living communities when working with the families of people living with dementia?

TS: The first step is to say, talk to me a little bit about what was going on right before the person came in. We want to know what the baseline was, so that when we are in the building, we’re not trying to get the person back to who the person was five years ago, which is really what the family member wants, either consciously or unconsciously. And if a community isn’t skilled at saying, “So, when was the last time you actually experienced your mom in that way?” then it can get really messy. Time is of the essence, and if you don’t manage expectations, all you are going to do is have red flags popping up along the journey if a family isn’t willing to get to a new place on dementia. A really good community will have some form of education available for families to have that information.

TS: If there’s not a locked door into the memory care unit all the time so people can transition back and forth throughout the day. I think engaging in multigenerational activities is huge. Creating dining and dietary programs that match dementia progression needs. Basically, it’s just being honest about the condition. It’s for communities to find the ways these individuals can have value in the world and start to acknowledge it’s not all-or-nothing for people living with dementia; it’s shades of gray, and then helping others appreciate that.

Communities also need to recognize the value of integrating opportunities for residents to engage, rather than just having an activities program with the three Bs: birthday parties, or parties of some sort; bible study, or faith-based activities; and bingo, or periodic organized fun. It’s important to build programs that really recognize the need to be well-balanced. That is the sign of a good quality senior program.

Pivot: Language is a key element of your PAC philosophy, including the use of terms like “people living with dementia,” “neurodegenerative care” and “brain change.” Why is it important to focus on changing the culture through language?

TS: If, for example, I said, “I have a friend, she’s demented, and her daughter has to do a whole lot for her and it’s just really sad.” Versus, “I have a friend who has just been recently diagnosed with vascular dementia. Really, she is doing quite well. One of the things she’s discovered is she’s not really good with time right now, so I serve as a calendar reminder for her and it’s making a big difference. So, it’s just different than it used to be.” It’s different to say about a person, “she’s demented,” than “she is living with dementia.” People aren’t victims. We can’t go around with this idea. If I were living with dementia, I certainly would not want people referring to me as a victim. And if you ask people who are living with dementia, that’s what they will tell you.

Laura started what is today Pivot in 1998. She loves to orchestrate talent and drive projects.